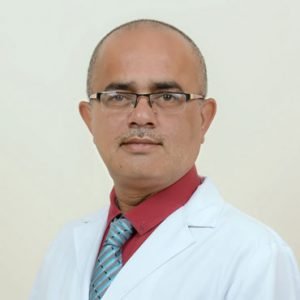 The Psychiatric services at Nirmal Neurocare Hospital is run by, Dr. Shailendra Gaikwad. The doctor’s distinguished background began in 1993 through 1999, when he took his Bachelors in Medicine and Surgery from Marathwada University. From that time through 2003 he studied for his D.P.M at the University of Mumbai, and graduated with honors. In 2005 until today he is a lecturer and undergraduate teacher at the Government Medical College and Hospital, located close to Nirmal Neurocare Hospital.

Over the course of the last 16 years, the good doctor has taught and been instrumental in psychiatry in India. Coming to Nirmal Neurocare Hospital was a natural move for him, being that the university where he teaches is in the same city, as the hospital. The groundbreaking work he is involved in at Nirmal, crosses over into his teaching, making him a outstanding member of the psychiatric community.

Dr. Shailendra has worked in hospitals that accommodated from 100 to 1800 beds. He has led teams in psychological medicine